It’s eight thirty in the morning,  and I ‘m sitting out underneath my patio sipping my cup of tea. Jack the Belgian Shepherd is snoozing in his bed nearby. The birds are twittering noisily in the jacaranda tree next door. On Sunday at 11.05am I fly out to Dublin.

I’m about to undertake my first writing expedition, a trip to Ireland to perform research for the first three books in series of crime novels to be set in Galway and Dublin. The original idea for these books began to form when I was eighteen, and over the years the ideas have multiplied and characters have taken on a three-dimensional existence in my head. The books were originally set in my hometown of Brisbane, Australia. In September 2012 I spent six days in Ireland as part of a two-week Britain and Ireland bus tour, and upon visiting the city of Galway on the west coast, I knew this was where I wanted to set my crime novels. 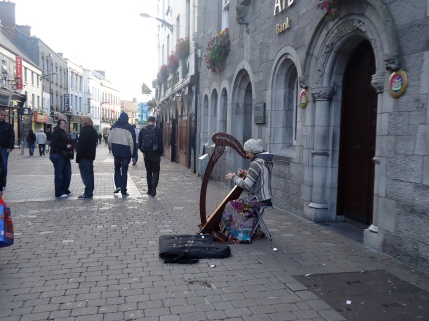 In 2014, I decided I needed to return to Ireland to perform research. I had recently met with a new editor, Fay, when when listening to me talk so passionately about writing these books, encouraged me to start on them straight away. But the memories of Galway and Dublin were not enough, and for two years I put the first draft of the first book aside for two years. In 2016 I could no longer bear to keep the ideas in my head and notebooks. I began to write the books again, minus the finer details about settings for the time being.

I took awhile to make up my mind to prioritise Ireland as my next overseas trip. I was interested in doing others, mostly Europe and Canada, and was keen to go somewhere new. But the fact I was so indecisive made it clearer to me that it was the Ireland trip I needed to do next. I needed to get it out of the way so that I could focus on the places I had not yet been.

At this stage, I had not yet even told my partner Greg about my interest in returning to Ireland.

It was shortly after making the decision to return to Ireland, in September 2015 (yes, I really do take my time), that Greg and I went on a weekend getaway to Melbourne. It was on this trip that Greg asked me to marry him at the Twelve Apostles lookout on the Great Ocean Road. Of course, I said yes (after about a minute of solid crying).

In the wake of this exciting milestone, I wondered how getting married would impact on my desired trip to Ireland, and subsequent trips on my travel bucket list. As discussions of weddings and settling down became more frequent, I was unable to ignore a growing niggling feeling about my proposed Ireland trip. I hesitated to tell Greg about this desire to visit the Emerald Isle again, as it would undoubtedly delay our wedding plans. I confided in one or two close friends, and it was during one of these conversations that I admitted out loud to myself that I could not get married until I had been back to Ireland. One of these friends suggested a three-month working visa to truly immerse myself in the Irish culture. After a further period of nervous procrastination, I worked up the courage to talk to Greg. As expected, he was shocked, not just by my desire to go back to Ireland, but more so my hesitancy to talk to him about it.

Before meeting Greg in 2010 I had a healthy travelling appetite, but it wasn’t until my first international trip to Britain and Ireland in 2012 that the travel bug was well and truly ignited. After returning from this trip, my travel wish list rapidly expanded. This was a new part of me that had not been as prominent when I’d met Greg, and in the first two years of our relationship.

I told Greg that I wanted to do the three-month working visa, but after a lengthy discussion he convinced me to reduce my trip to a one-month holiday. I agreed that this idea was best for me; spending valuable writing time looking for work and being at work during a three-month period away wasn’t as appealing as I’d first thought. We agreed I would take this trip as soon as possible, so that we could get on without wedding plans.

While Greg does enjoy traveling, his wanderlust was not as extensive and passionate as mine. He was more focused on getting married, settling into a career and looking to start a family.  The idea took some getting used to, but I was able to convey the importance of this trip to him, and as I planned more and more, Greg became more involved in the process, and even helped me with some steps along the way.

Travel has the potential to be a deal breaker in a relationship. It takes time and money, and if both partners aren’t as keen as each other to do it, it can be very a very tricky subject to navigate. I believe it is on par with the decision to have or not have children (perhaps not as divisive). I would be the first person to encourage someone if they were considering solo travel whilst in a relationship. I believe it is an important part of maintaining independence in a relationship. So I was confronted by how challenging I was finding it to follow my own advice. I was eager to not let anything get in the way of achieving my travel dream, a drive I also held for my writing. Now, I was aware of an increasing sense of guilt within myself. I felt guilty that I would be leaving Greg behind. I felt that because my passion for travel truly blossomed after we met, that somehow I was unrealistic and unfair in expecting Greg to accept this new interest of mine when it wasn’t part of the deal when we first started out. Was it wrong of me to be more interested in world exploring than saving for a house? At twenty seven years old, should I have been more focused on settling down, for the sake of my future security?

My travel goals reached beyond Ireland; before having children, I wanted to visit Canada and Japan, do a loop around Western and Central Europe, revisit Scotland and attend a writing retreat in Iceland. This would obviously take several years to achieve, and I felt guilty for interrupting Greg’s goals for our life with my own for travel. But at the same time, I simply couldn’t submit myself to starting a family before getting this travel wish list ticked off. And I was okay to do it alone if Greg wasn’t interested in coming along.

This determination to achieve my goals, along with attaining the worldly knowledge of people and places outside of my own city, were fundamental values I wanted to pass on to my future children.

Preparing for this trip to Ireland has been an incredible experience of growth for me. For the first time in my life I found myself standing my ground and being clear about my intentions. I was determined to find a way to achieve my travel goals and maintain my relationship with Greg. Talking about your goals and plans with your partner can be hard, especially for introverted, sensitive types like myself. If you’re like me, it’s hard to speak up sometimes. I found it helpful to make it known to Greg that I struggled to verbally communicate certain things sometimes, and to educate him on how he could help make it easier for me. I sometimes find it easier to write things down first, and sometimes have Greg read what I’ve written before discussing it instead of saying it straight to him. As apprehensive as I was about Greg’s response to my passion for travel, it was a huge relief once I’d told him.

As I prepare to take off on this trip, I’m reflecting on everything I have learned from the process leading up to my departure. I have become so much stronger, capable of facing confrontation and still standing by my position. While it may initially seem to challenge the relationship, if it is worth it, and if you are open to reason and compromise, you will work out how everyone involved can get what they want. If it can’t be worked out, then ultimately both parties aren’t going to be able to allow each other to be their true selves in the relationship.

I am truly thankful to my wonderful fiance Greg for his undying support of our relationship. For always allowing me to be my true self. I cannot wait to return to Australia to start planning our wedding. But first, the Irish adventure…