After six hours and over 500 kilometers worth of driving, passing through Gympie, Tiaro, Childers, Gin Gin and Miriam Vale, we finally reached the city of Rockhampton, on Queensland’s Central Coast.

The estimated urban population of Rockhampton in June 2015 was 80,665, making it the fourth-largest city in the state outside of the cities of South East Queensland, and the 22nd-largest city in Australia.

Rockhampton is one of the oldest cities in Queensland and Northern Australia. In 1853, Charles and William Archer discovered the Fitzroy River, which they named in honour of Sir Charles FitzRoy. The Archer brothers took up a run near Gracemere in 1855, and more settlers arrived soon after, enticed by the fertile valleys. The town of Rockhampton was proclaimed in 1858, and surveyed by Arthur F Wood and Francis Clarke, the chosen street design closely resembled the Hoddle Grid in Melbourne and consisted of a grid of wide boulevards and laneways, which was uncommon in Queensland.

Within the year, gold was found at Canoona, and led to the first North Australian gold rush. This led to an influx of migrants who quickly transformed Rockhampton into the second-largest port in the state; during this period, Rockhampton was nicknamed as the “City of the Three S’s”, of which were “Sin, Sweat, and Sorrow”. Subsequent gold rushes at Mount Morgan Mine, which was at the time one of the most productive gold mines in the world, laid the foundations for much of the city’s Victorian architecture.

Today, Rockhampton is the industrial and agricultural centre of the north, and is the regional centre of Central Queensland. Rockhampton is also a large tourist destination known for its history and culture supporting such institutions as the Rockhampton Art Gallery, one of the most extensive regional galleries in Australia, the Central Queensland University with campuses across five states, the Rockhampton Heritage Village, and Dreamtime Cultural Centre. It is also famous as the hometown of Rod Laver – one of history’s best tennis players. The city acts as a gateway to local tourist locations such as the Capricorn Caves and Mount Archer National Park, as well as regional tourist areas like Yeppoon and the Capricorn Coast alongside the island chains offshore that include Great Keppel Island.

The cattle trade is a dominant industry in Central Queensland, and has been visually represented around Rockhampton City with a set of seven large statues of bulls known as the ‘Big Bulls’.

The Central Queensland Livestock Exchange at Gracemere is one of the largest livestock sales facilities in the country, lies just to the west of the city.

Rockhampton promotes itself as the Beef Capital of Australia, but the title has been disputed a number of times by the New South Wales town of Casino. The tri-annual Beef Australia Expo held in the city is a celebration of the local area’s cattle industry.

Karl Stefanovic, former Rocky WIN News reporter, has gone a long way since his days as a young journalist in the Beef Capital. Karl, who is now a co-host of Nine Network’s Today show, lived in Rockhampton after completing his university degree. Christine Anu,  17 time ARIA nominated pop singer and actress who gained popularity with the cover song release of the Warumpi Band’s famous song “My ISland Home”, spent all her high school years here.

Since European settlement, Rockhampton has experienced shaking associated with several earthquakes, in 1883, 1918 and 2016. The region has also experienced meteorite sightings- on 2 August 1903, many people in Rockhampton reported seeing a meteorite. Between eight and ten minutes after the meteorite was observed in the sky, a loud boom was heard which shook houses, rattled tin roofs and moved telegraph wires.

On the night of 31 October 2016, Central Queensland residents, including in Rockhampton, Yeppoon and Gladstone, reported seeing a bright orange light in the sky. Many residents in the Gladstone area south of Rockhampton, particularly those living in the Boyne Island and Tannum Sands areas, reported hearing a loud boom soon after. Despite the light also being observed in Rockhampton, there were no reports of the boom being heard there, unlike in 1903. Experts including astrophysicist Jonathan McDowell, Astro Space News editor Dave Reneke and private astronomer Owen Bennedick all concluded that a meteorite had crashed to earth near Gladstone.

Rockhampton wasn’t quite the end of our road. We still had another forty minutes and forty kilometers to drive northeast, to the seaside township of Yeppoon.

Yeppoon is the principal town on the Capricorn Coast, a string of seaside communities stretching more than 150 kilometres (93 mi) from north to south. The beaches and shallow coves provide a destination both for tourists and miners settling down in Central Queensland. Offshore, there are 27 islands including Great Keppel Island, which is 20 kilometres (12 mi) from Yeppoon. Yeppoon is the gateway to the Southern Great Barrier Reef.

The Capricorn Coast was part of the traditional lands of the Darumbal Aboriginal people. Yeppoon was first settled by the Ross family in 1865 who took up large landholding along the length of the Capricorn Coast. Fruit crops, cattle, and wool were the major industries of the early town. A short-lived period of sugar cane growing followed from 1883 to 1903, which failed due to unseasonal rains and lack of financial backing. Along with other sugar growing areas of Australia, South Sea Islanders were used as labourers on the sugar plantations, often without their consent, an activity known as blackbirding. Pineapples, mangoes and other tropical fruit became the mainstay of local agriculture in the new century, with cattle grazing and fishing also contributing to the local economy.

On 20 February 2015, severe tropical cyclone Marcia crossed the Capricorn Coast near Shoalwater Bay as a category 5 Cyclone. The storm destroyed more than 150 houses in Yeppoon and left more than 13,500 residents without power. 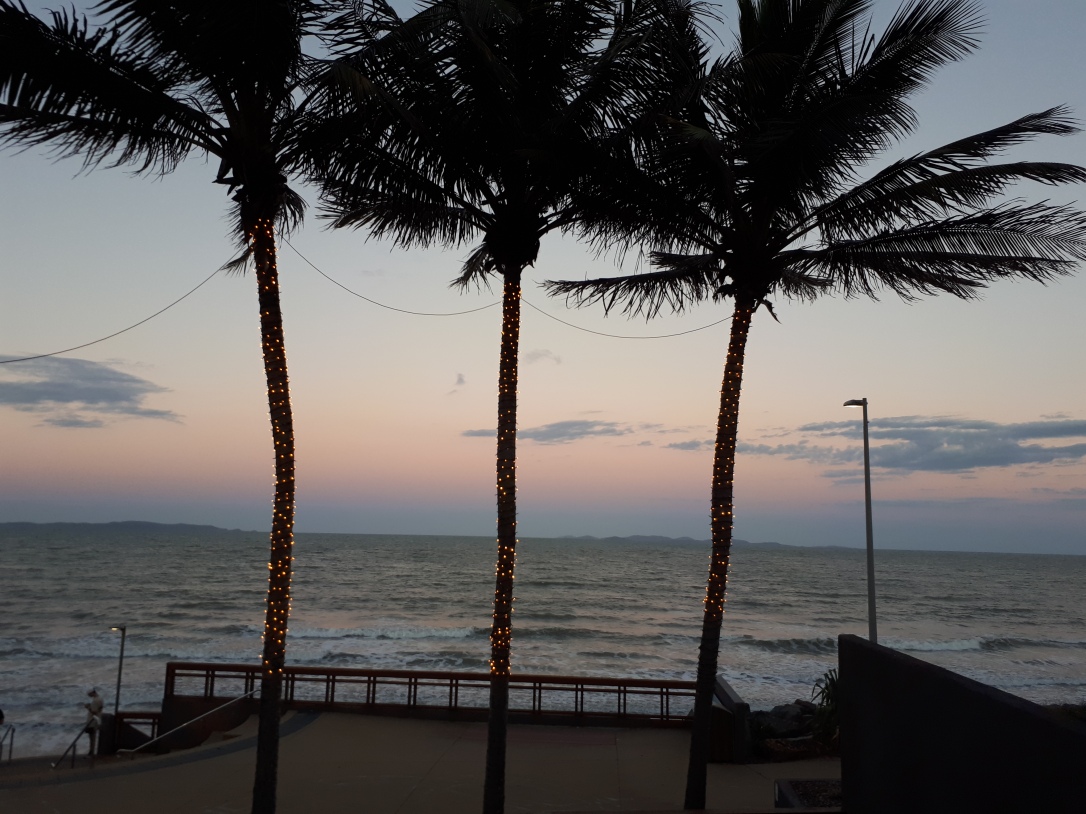 Well, I’ve reached Yeppoon, where my new life begins. I hope you’ve enjoyed coming along for the ride on my Rocky Road Trip blog series. Keep an eye out for my upcoming blog series Books By The Beach Series 2, which will take off right here in Yeppoon, and in which I will be bringing all the beautiful beaches of the Capricorn Coast straight to your screen, with a literary touch.

I hope you’ll join me then!

After leaving the Gold Coast, I stopped in Mount Coolum on the northern end of the Sunshine Coast for a day to spend time with family before embarking on the Rocky Road Trip. I was joined there by my Mum, who had been living in Yeppoon for several months prior to my own relocation there, and who was helping me with the big move from the Gold Coast. 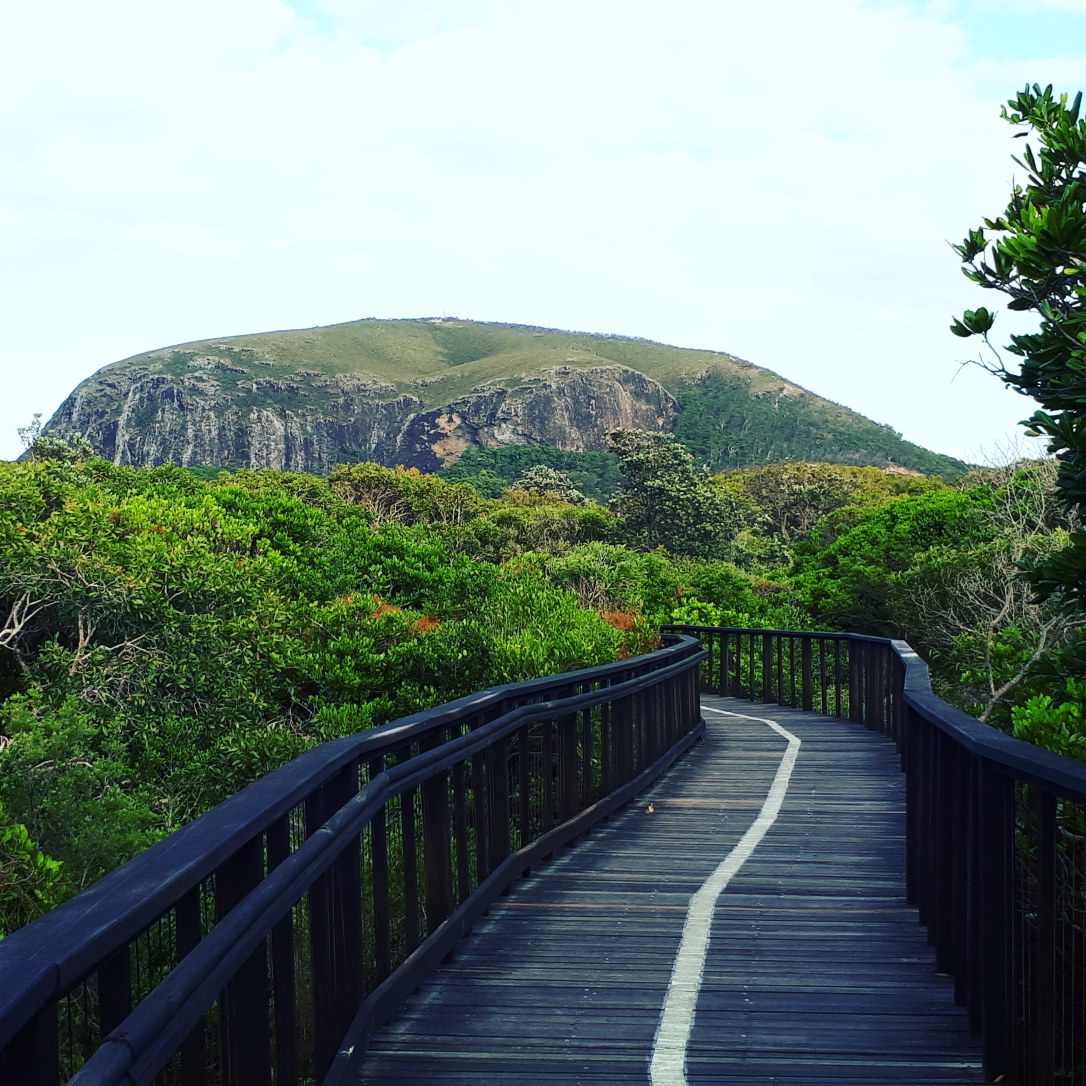 11 km north of Maroochydore, Mount Coolum is a residential suburb whose boundaries enclose the Mount Coolum National Park (north section) and the topographical mountain (207 m). The name is thought to derive from an Aboriginal word describing the blunt or cut-off summit of Mount Coolum. The craggy mount contrasts dramatically with the lowland heaths and wetlands.

Land selection around Mount Coolum began in 1871, including the future adjoining suburbs of Marcoola, Yaroomba and Coolum Beach. All had swampy parts, but drainage schemes during the 1910s-30s produced land for cane farms and dairying. A cane tramway from Nambour and Bli Bli included a passenger service, bringing visitors to the area. Among various beach-subdivision proposals there was the idea of tobogganing on Mount Coolum.

Coolum Beach’s surfing and fishing were more realistic attractions, and the beachfront population came to a few thousand by the mid 1980s. Developers turned their eyes to the mountain’s subdivisional potential, but a successful preservation campaign instead brought about the national park. Land south of the national park had already been acquired for a golf course (1976), to which Mount Coolum is a stunning backdrop.

Mount Coolum has a stretch of beach further east.

Kathleen McArthur was a gifted wildflower artist and author and, in 1962, co-founded the Wildlife Preservation Society of Queensland. Kathleen’s home in Midyim, near Kings Beach, was named after the native sandberry, and was the first native garden in Caloundra. In 1967, the first Wildflower Show was held in Midyim and continued there until 1971, when it outgrew the space and was moved to Coolum.

A friend and associate of Kathleen’s was the acclaimed Noosa author Nancy Cato. Nancy was appointed a Member of the Order of Australia for services to literature and the environment and was awarded an Honorary Doctorate of Letters in 1991. She wrote for more than 50 years, producing a vast amount of work includign an accalimed environmental book titled The Noosa Story first published in 1989.

In 2017, local author Jess Townsend was dubbed the next J. K. Rowling with her first novel Nevermoor: The Trials of Morrigan Crow touted to be the next generation’s Harry Potter.

Join me next at Gympie- the first stop on my Rocky Road Blog Tour! 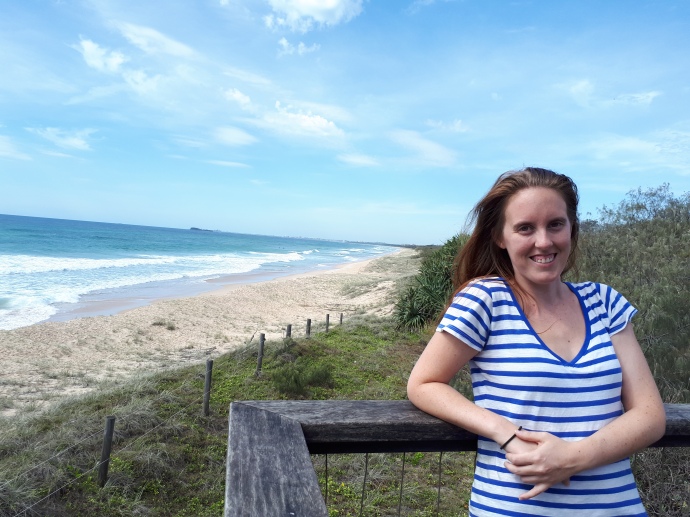 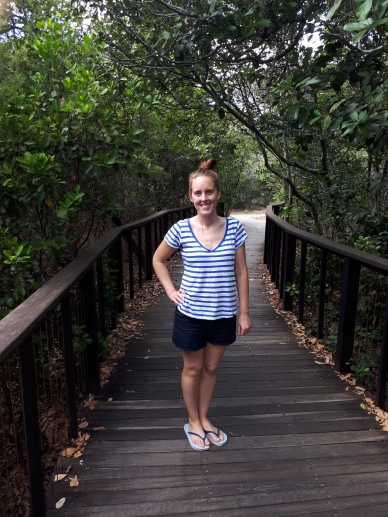 Welcome Nobby Beach, stop no. 6 on my Books By The Beach Tour!

My apologies, I have called it ‘Nobby’s’ in the video! But I don’t think anyone ever gets it right!

This amazing café precinct borders the famous Hedges Avenue ‘Millionaire’s Row’ and is home to an array of boutique bars and restaurants. Frequented by cyclists and surfers, this local spot blends a family-friendly atmosphere with an ultra-trendy vibe. 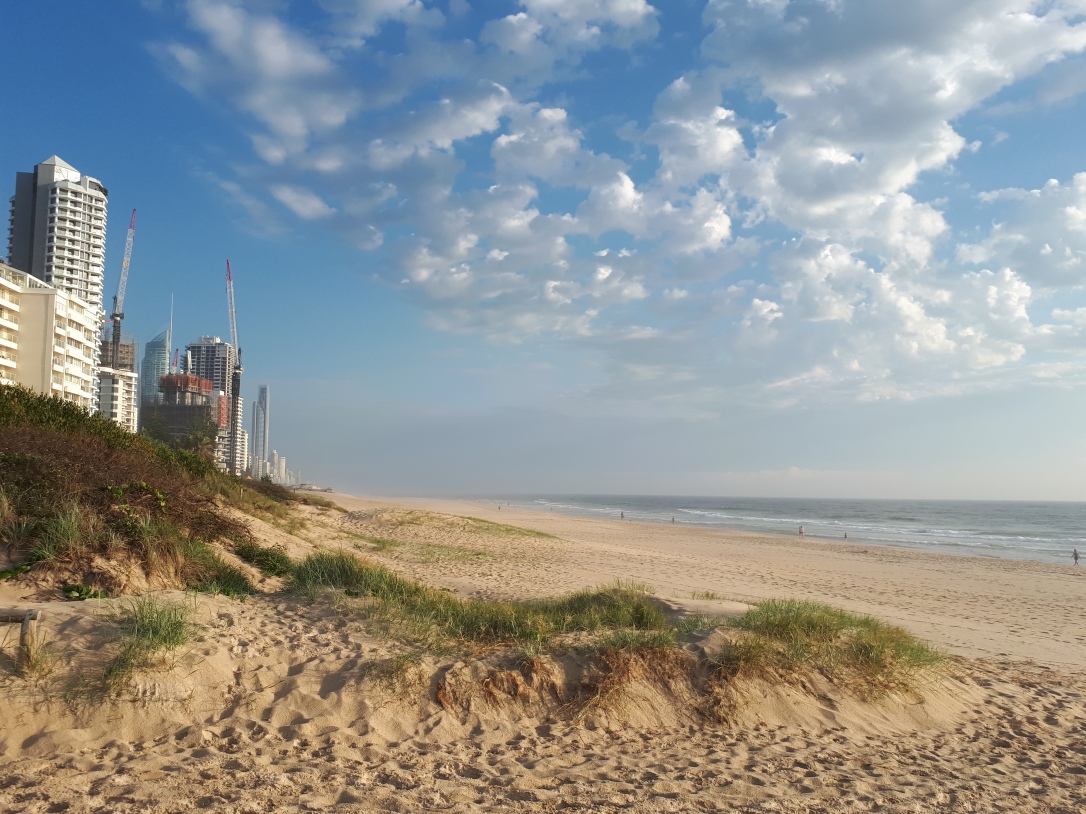 At the southern end, the beachfront features a walking track that connects to the picturesque lookout at North Burleigh Hill. During my time living at Broadbeach, I would frequently roller skate along this track (pictured below)! 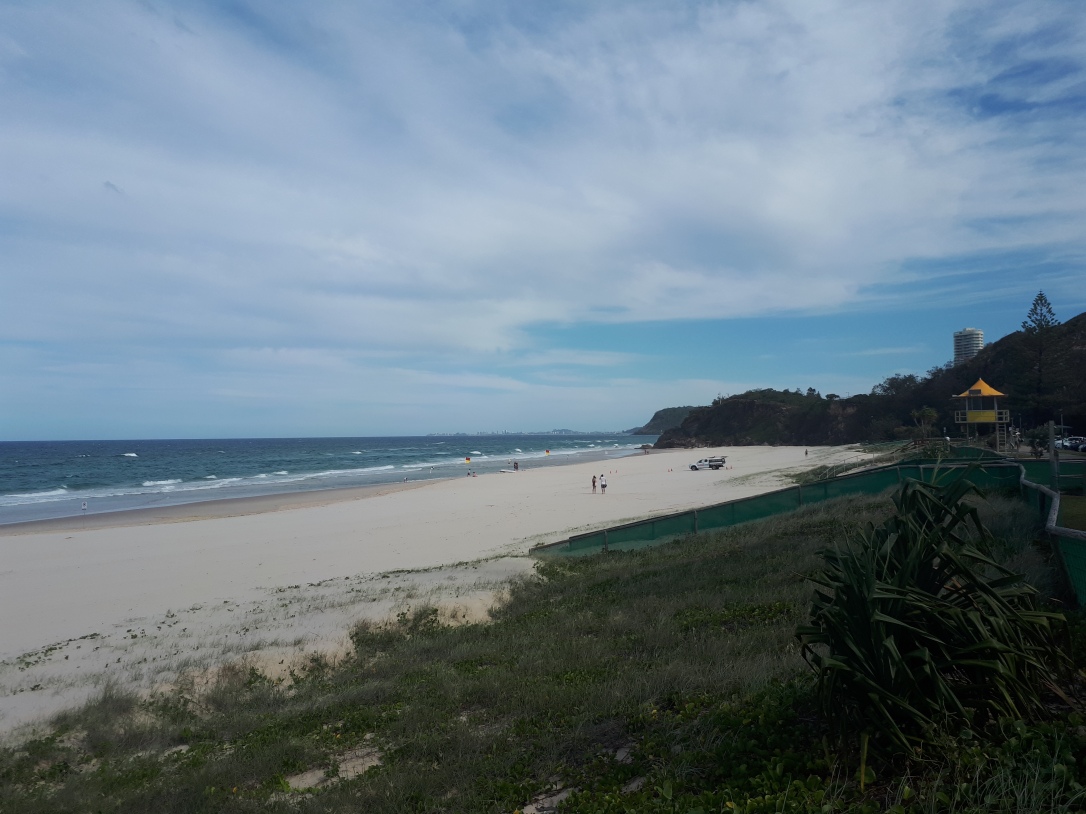 Frederick Fowler was a timber-getter, hauler and grazier in the Tallebudgera district. It is documented that the Nobbies was the late nineteenth century name for Little Burleigh Head – and a local reference to Fowler’s head bullock, Nobby, which once went missing and was found there.

Nobby Beach is located in Mermaid Beach itself.

Blind is another of my short stories that took quite a bit of time and work to get just right, and went through quite an evolution in the process. The story is set right here on the Gold Coast, in the iconic party precinct of Surfer’s Paradise, where a night out on the town with friends goes horribly wrong…

PLEASE NOTE: My books are not currently available on Amazon/Kindle. Instead you can download a FREE PDF version of the story for HERE: Blind 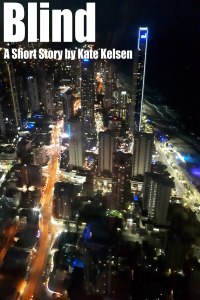 I hope you have enjoyed your time here with me at Nobby Beach. Next stop, Miami!

We are professional daydreamers . . . . #weeklywritinginspiration #authorquotes #authors #publish #burtonrascoe
After several rounds of revisions, the new cover for The Wilted Rose is finally finished!! It certainly has been tricky keeping track of the revisions whilst preparing to relocate to the Gold Coast, and the back-and-forth nature of the revision process can be frustrating. Thankfully I think the busyness of moving kept me distracted! 😂 I'm now one step closer to getting my books republished and back into distribution 😁 Cover reveal coming soon, watch this space!! . . . #bookcoverdesign #coverreveal #bookproduction #indiepublishing #patience #persistence
A quick elevator-pitch style description is all you need 😊👌 . . . #elevatorpitch #shortandsweet #bookpromotion #wip #workinprogress
Editing DONE!! 👌👌 Did just finish editing the revised edition of Paid To Dance: Asha's Story Part One, ready for the proofreader!! Now to revise Part Two 😂😣😥 . . . #amediting #proofreading #revision #revisededition #stories #storiesaboutwomen #australianstories #truestories #stripping
Basically sums it up! . . . #authorquotes #writingprocess #writingideas #writinginspiration #lovehaterelationship
UPDATE: REWRITE COMPLETELY COMPLETE!! 🎆🎆🎆 I just finished writing the first draft of my new short story titled 'Parasomnia', and have therefore completed the rewrite process of The New Neighbors former-short-story-collection-turned-anthology!! Now to type all the new drafts and prepare them for publishing! But first, time to move 800km south back to the Gold Coast! . . . #wip #workinprogress #mystery #suspense #domestic #fiction #rewrite