Welcome to The Spit!

The Southport Spit is a neighbourhood within the northern end of Main Beach. A permanent sand spit separates the Southport Broadwater from the Pacific Ocean. The Spit is also a popular dog beach, with a large protected cove on the Broadwater and the uninhabited surfside sands of the northern tip of Southport.

The Spit was formed between 1897 and 1898, a product of longshore drift when high seas broke through a small area of land called Jumpinpin on Stradbroke Island.

During the 1940s the Southport Yacht Club gew and added marina facilities to the increasing number of private boats wanting to moor on the Spit’s eastern side of the Broadwater. Since the 1950s and ’60s, the local prawning industry used The Spit for their berth. The Spit continued to develop, with tourist attractions opening in the 1960s.

The Spit is home to the Sea World theme park and resort, the Sheraton Mirage Resort and Spa, as well as the Palazzo Versace hotel. On the end of The Spit is the Gold Coast Sand Pumping Jetty, a popular destination for fishermen and part of the Gold Coast Seaway’s Sand Bypassing System.

Pedestrians and cyclists explore the Spit via the Gold Coast Oceanway and the Federation Walk.

Here at The Spit I’m going to tell you about my short story collection The New Neighbours.

The New Neighbours is a collection of eight psychological suspense short stories, exploring the secrets hidden behind closed doors, and the dark side of the human psyche. In the title story, a curious teenager uncovers a sinister neighbourhood secret when he loses his football over the fence. In A Kind Gesture, a lonely divorcee picks up a young hitchhiker, but all is not as it seems. The New Neighbours is a mix of twisted stories and unsettling characters, compiled into a cleverly written short fiction collection. 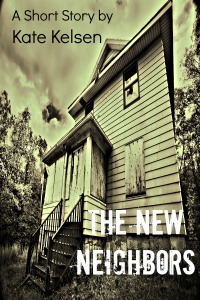 I hope you have enjoyed your time here with me at The Spit. Next stop, Surfers Paradise!