The first sign that I I wasn’t meant to go to Letterfrack on Tuesday either was that I forgot my packed lunch. I didn’t realise I had left it in the fridge until I was halfway to the bus stop. I was up early and caught the bus into town in time for the 8.30 to Letterfrack, but there was no bus no. 421 or 420 at Eyre Square. I crossed the street and walked up to the coach stops outside the train station, and bought a ticket from the machine inside. I went into the Bus Eiren Office to double check which stop the Letterfrack bus departed, but was told by the attendant that there was in fact no bus to Letterfrack until 6pm! Upon checking again he informed me that there was in fact a bus at midday, but that it departed from the coach station down the road. On my way to the coach station, I stopped in at the Tourist Information Centre to see if they could clear a few things up for me. Although there was another bus at 12pm, it would only take me as far as Clifden, 14 kilometers from Letterfrack, and I would have to catch a taxi the rest of the way. The lady at the tourism office advised me to return to the train station and get a refund for my ticket, as the machine shouldn’t have sold it to e if the service was not available. I did so and the man at the Bus Eiren office gladly refunded me. I made my way back up past the tourism office to the coach station, and found out where the bus to Clifden left from. Now that I was there, I decided that perhaps I would abandon my effort to go to Letterfrack for the second time, as it would be too much hassle to get there from Cliften. It would be easier just to wait until the next day when i could get the bus all the way to Letterfrack and back again.

It was still only fairly early in the morning, so I popped down into town. I found Hazel Mountain, a hot chocolate shop that Laura had recommended, and waited until 10am for them to open. There is just something about the hot chocolates in Ireland that make them simply divine, and I think it has to do with the milk. I then popped up to the post office to send my Mum a card for her birthday on St Patrick’s Day. I popped up to the City Council to request a list of the halting sites, and was asked to make a written request there and then, which the lady would pass on to the appropriate person. All I wanted to do was find out when the sites were established, but apparently that is classified information! I still hadn;t heard from anyone i’d left my number with, so I didn’t have much hope here. I would just have to make it up.

I headed home and phoned the Garda District Office, who informed me that it was not possible for them to set up a meeting for me with a Garda officer, but to try the Garda Press Office in Dublin. I even went so far as to contact the Garda Training College in Tipperary, but once again had my name and number taken to no avail. Another instance in which I felt I was going to have to go by the knowledge I had been able to derive from the internet, and make up the rest!

That evening I headed back into town to have dinner and scout out a pub/bar for a location in my book. I had dinner at Nimmo’s restaurant next to the Spanish Arch, and then had my second milk draught at Bierhaus.

I took advantage of their wi fi for some time, and then headed to the next destination on my solo pub crawl. I located all the pubs and bars Laura had suggested to me, but did not go into them all, as it was getting later and i had my third attempt at getting to Letterfrack the next day. I had not gone into all of the venues, but I did go into Tig Coili (pronounced tig coo-il-ee), where I had a half glass of Jamieson’s whiskey and sat back to listen to the live band playing traditional music. I arrived home at midnight, to be up again at 6.45am. 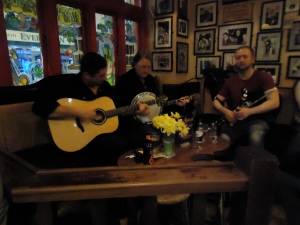 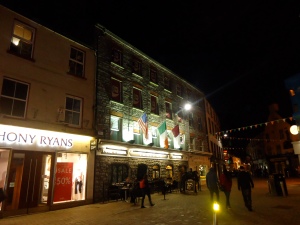