Galway city is a true gem, with traditional Irish charm without the global bustle of bigger cities like Dublin.

Galway is known as Ireland’s Cultural Heart and is renowned for its vibrant lifestyle and numerous festivals, celebrations and events. Every November, Galway hosts the Tulca Festival of Visual Arts as well as numerous festivals.

On 1 December 2014, the Director General of UNESCO announced the official designation of Galway as a UNESCO City of Film.

Furthermore, there were 51 venues for events, most of which were specialised for a certain field (e.g. concert venues or visual arts galleries), though ten were described as being ‘multiple event’ venues. The main squares in the city are Eyre Square in the centre of the city, and Spanish Parade next to the Spanish Arch.

The reason I love Galway City so much is because you get a true taste of Irish life here. There is always traditional music spilling out of a pub somewhere. There are buskers on every corner, playing traditional and modern music. The streets are cobble stoned, and the historical buildings have been maintained. Refreshingly, There isn’t a major chain store in sight!

During my six day stay in Galway, I visited the following locations: 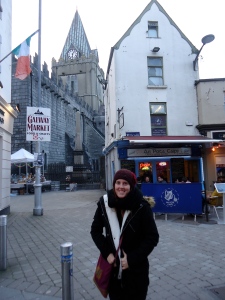 So today the pot of 🍯gold🍯 was out in the middle of the ocean😂🌈 two dolphin spottings today, one from Point Danger just and one from the top of Greenmount Hill! 💙🦈
🏅Little Wins🏅 Today was focused on finishing my last assessment for my current unit of study in my Cert 3 in Business. Organising Schedules- yay! 😞 For someone who loves lists and routines I still found this unit quite boring 😅 finished and sent the assessment away for marking, and so ready to unleash some creativity for Writing Fridays with @gclibraries tomorrow! . . . #littlewins #dailygoals #sunsetsoverthebeachesfromnowon #winterinqueensland😎 #study #business #boring #creativewriting
Oops forgot this one. I actually have started reading this a short while back but had too many books on the go at once so decided to finish them first 😂
Choose wisely what you feed your mind. What books are you reading right now? . . . #youarewhatyouread #youarewhatyouwatch #choosewisely #feedyourmind
I have been mostly quiet about the protests in the US, but these events have caused me to do a lot of soul searching about what I should be doing and not doing, saying and not saying. Waiting for guidance on the response that felt best for me. I am not one to just go and do/share/repost something because everyone else is doing it. I won't be pressured by social media movements because it seems the the socially acceptable thing to do. I have shared two posts that did resonate with me, and as a result I have felt completely emotionally drained. Resharing lots of posts and putting black tiles on my socials simply hasn't felt right for me, and while I know doing these things is not about me, I still need to be aware of how it impacts my mental health and energy levels, as we all do. After all, we can't give from an empty tank. My response to the current situation is to educate myself, and so I have revised my current reading material in respect of the current situation. I'm especially excited about reading 'The Awakened Woman'. I first heard the story of Tererai Trent on Oprah, and was delighted to find her book The Awakened Woman at a Kikki K store on the Sunshine Coast. For those of you that aren't familiar with Tererai Trent, as a young girl in Zimbabwe Tererai yearned to receive an education, instead by the age of eighteen she had already become a mother of four. Now, not only has Tererai earned her PhD but she has also built schools for girls in Zimbabwe. But let me get one thing straight. I am have decided to read these books at this particular time because of what is going on right now. As a personal mark of respect and solidarity. But I bought these books a year ago because these were inspiring women with inspiring stories to tell. Not because of their skin colour. In our efforts to conquer racism, I hope we don't create more separatism and duality because of skin colour. A revolution has many lanes. Be kind to yourself and to others who are traveling in the same direction. Just keep your foot on the gas. #amreading #mayaangelou #tereraitrent #weareone #theawakenedwoman #iknowwhythecagedbirdsings
Big Magic by Elizabeth Gilbert. I have read this book twice. The first time I read it with rose-coloured glasses expecting a book full of encouragement to follow your creative dreams no matter what. As a creative writer, I was somewhat disheartened by Liz’s honesty about the reality of living a creative life. I questioned my goals and how I viewed my own success as a writer. The picture of success as an author, and the goals I had set in alignment with that picture of success, were suddenly challenged, and I felt lost. The second time I read the book, I realised that Liz was not trying to discourage us from pursuing our goals, just not to be so attached to the outcome. To create, regardless of whether we achieve worldly ‘success’. And this notion has helped me connect with my love of storytelling in a whole new way. What book/s have changed your life? . . . #booksthatchangedmylife #inspirationalstories #amreading