My first day in Kinvara was St Patrick’s Day, and this small village’s celebrations suited my tastes just nicely. The national holiday fell on a Friday, and there was to be a parade held in the main street at 1pm. It couldn’t have been a more Irish day; gale-force winds and cold misty rain, the worst weather I had experienced since I’d arrived. However, this did not stop the parishioners of Kinvara coming out to celebrate their national day.

Crowds gathering along Main Street in preparation for the St. Patrick’s Day Parade

As 1pm approached, the people gathered along the sides of Main Street in their green, white and orange colours, sporting wigs, costume beards and funny hats. The little boy standing beside me was struggling to keep his small flag in tact as the wind blew, whipping it right off the plastic handle at one point. Finally, the show began a little past 1pm. I was horrified when I went to turn my camera on to see that I had left the battery in the charger at home! I pulled out my old iPhone 4 as a backup but with my luck it died on the spot, even though the battery still had 80% power and had been charging all morning. I conceded to saving the moments of the parade to my own memory, however halfway through the parade I sprinted back to my AirBnB accommodation five minutes up the road to retrieve the camera battery, and was back down at the Main Street in time to catch the last half of the procession.

From the top of the hill, the procession appeared, and traveled down to the bottom of the hill towards the pier. Farmers wearing over-sized green and white felt leprechaun hats had decorated their tractors with green, orange and white balloons. A musical band of children and adults alike demonstrated their multitasking skills as they walked along playing their instruments, including the saxophone, clarinet, fiddle and accordion.

The local junior football team skillfully kicked their soccer balls along, and one little boy lost control of his and went running down the street after it. There was also a very cute little Garda officer marching along! 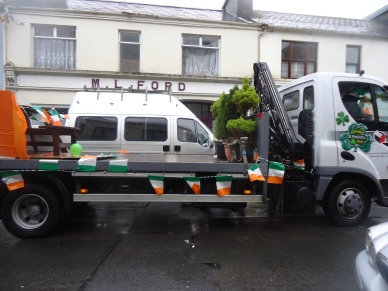 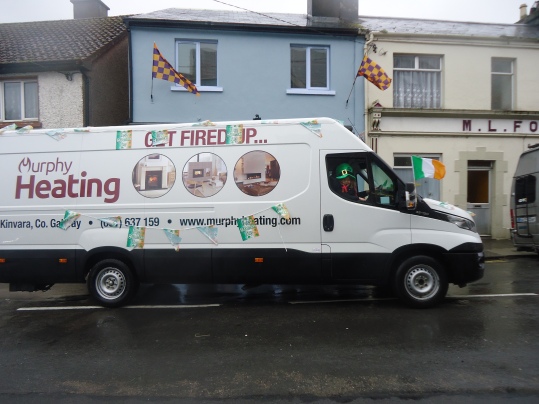 The parade was over within fifteen minutes, and luckily for me I was able to snap some pictures of some of the floats and vehicles I had missed when I’d made the dash back to the house as they made a loop around the block. I headed down to the pier to see if there were any markets at the end point of the parade, but there were none. There had, however, been a cake stall halfway down the street, that my AirBnb host Sharon had contributed to. I had to get myself a green cupcake for St. Paddy’s Day!

I chose to have my lunch at the Pier Head Café overlooking Kinvara Bay. I had eaten here the night before when I had arrived in Kinvara. The restaurant was packed full, but I managed to find a spot right at the end of the bar close to the fireplace. As I feasted away on my bowl of creamy seafood chowder and fresh brown bread, I watched the Dublin vs Clare hurling final being broadcast on the TV behind the bar, trying to observe and learn the rules. Hurling is a game similar to hockey, in that it is played with a small ball and a curved wooden stick. It is Europe’s oldest field game, brought to Ireland by the Celts at the end of the last ice age.

The weather being as wild as it was, I made for home after lunch, and spent the afternoon catching up on my blogging. I was still so full that night that a small container of cold pasta salad from the small supermarket up the street was satisfying enough for me! And then it was into bed ready for my first day of serious exploring.