On Sunday, the day after St. Paddy’s Day, I set out on my first day of location scouting in Kinvara. My AirBnB host Sharon had informed me of a lovely walk that looped around from the main road out of town around to the waterfront, and so I decided to take that route. Unbeknownst to me, but certainly not the first time on this trip, I went the wrong way. I followed the other main road to Gort, another town in County Galway. 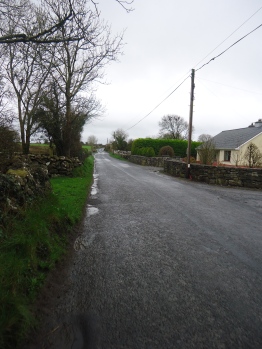 Sharon had informed me that at her daughter’s school to take the side road which would lead down to the waterfront, but I had not yet passed any school. I had the increasing feeling that I was headed in the wrong direction, but I was passing by a number of old farm houses and many animals including lots of sheep and very cute spring lambs. I was thoroughly enjoying the solitary walk along the country road (except for having to move aside for the cars that drove past every few minutes in and out of town, when there’s only muddy slush or bushes!) In total I walked an hour and a half and almost eight kilometres from town.

At this point I decided to turn around. Once I’d reached the Burren Nature Sanctuary, six kilometres back toward town, I decided to stop in for lunch and a rest before continuing the long walk home. After refuelling on a delicious chicken burger, I decided to divert slightly from my day of research and take a walk through the sanctuary. It was five euro to get in, and I was able to download an app which provided a guided tour all the way around the property.

The area featured a number of natural and cultural beauties, but my personal favourites were the Gypsy Wagon and the Hazel Woodland (Fairy Woods).

‘The Burren Nature Sanctuary is in the townland of Cloonasee, which means ‘Meadow of the Fairies (or Wise People)’. Well known poet William Butler Yeates spent time in this area, and met local people who told him about seeing and meeting fairies. These stories are collected in his book ‘Fairy and Folktales of Ireland’. Fairies are mischievous, but will always treat people well unless they are treated badly. Never cut down a White Thorn Bush, especially if it is on it’s own in a field. Why? Well, it may be a fairy realm! If you have a look, you’ll find the fairy houses in the Hazel Woodland. But don’t wake the up, as they work at night, and are tired during the day. If you knock on their doors and wake them, they might get cranky, and put a spell on you. You have been warned!’ 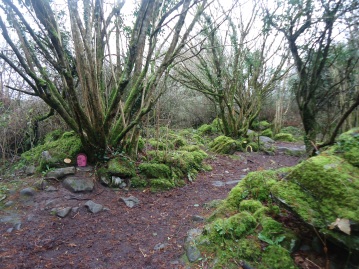 Oh and I can’t forget about the cute farm animals!

At the end of my wander through the sanctuary, I sat down for a cup of tea in the cafe where I’d had lunch before continuing. This little detour from my day’s plan proved very effective in breaking up the long walk back to the village, as the last stretch seemed much shorter. Dusk was beginning to set in by this time, but as if I hadn’t walked enough that day, I continued up along the road I believed Sharon had meant for me to take that morning. Once again heading out of town, in no time at all I was passing by the school, and I knew that this time I was headed in the right direction. I wasn’t going to do the whole loop around alongside the waterfront as it was so late already, but out of curiosity I explored a little way along. Next to St Joseph’s National School was St Joseph’s Church, and a little further out of town was another Catholic church, St Condis. 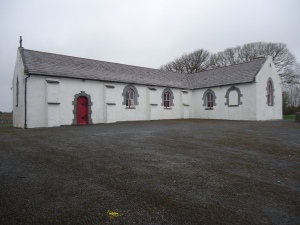 I had a little wander around the grounds and snapped a few pictures for my records. It had the added spooky feature of an old cemetery out the front of the grounds. On my way back towards town I passed by two very old, derelict and apparently vacant houses, and down an alleyway beside the houses noticed a mobile home and two cars parked. 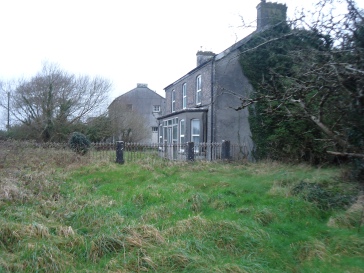 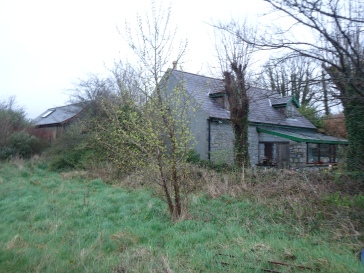 Suspecting this was a possible halting site, I dared to take a wander down to take a look. There were indeed a few caravans and cars parked up, and it all felt very secretive. In all of my research of halting sites in County Galway, I had not seen one listed for Kinvara, even a temporary one. I was very curious, and even if it wasn’t a halting site, it was inspiration for my story!

One thought on “Day Two in Kinvara: Gypsy Wagons and Fairy Woodlands”