My third day in Kinvara I actually followed the right road out of town. On the way I stopped by the local Garda station, on a quiet street alongside the Merriman Hotel.

Continuing on my way, I turned down a narrow laneway beside St Joseph’s National School, which led me on a lovely little wander along a quiet backstreet down to the water’s edge. There, I found a bench to sit down and soak in the rugged beauty that unfolded before me. 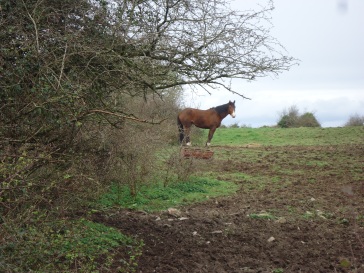 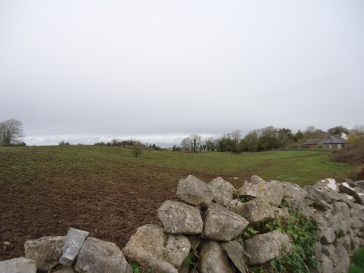 Walking alongside the bay I reached the pier I stopped to take a few snaps of some of the boats. 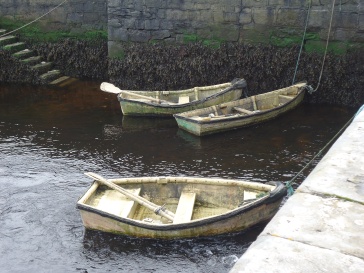 And found one that I would have loved to have taken home!!

The Fairy Queen- It was for sale too!

I then continued the walk along the road out of town toward Dunguaire Castle.

Dunguaire Castle (Irish Dún Guaire) is a 16th-century tower house on the southeastern shore of Galway Bay in County Galway. The name derives from the Dun (a medieval fort) of King Guaire, the legendary king of Connacht. The castle’s 75-foot (23 m) tower and its defensive wall have been restored. The grounds inside the fort are open to tourists during the summer, but there was a dirt track around the outside of the fort that was still accessible. 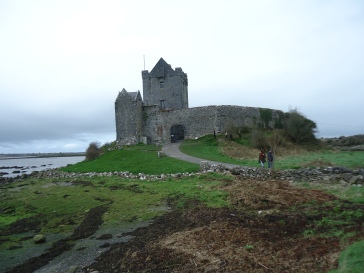 The following two days in Kinvarra were fairly uneventful and not really worthy of their own blog posts, so I’ll briefly summarize them here. I walked back through the village to the houses down by the pier that I had scouted out for use as locations in my novel, and basically tried to make a solid decision on which ones I would use, and if I needed to go and inspect them again. I also inspected the site of Seamount College, a secondary school here in the village which had previously been a boarding school run by nuns. I caught up on my blogging and visited some lovely little cafes, one in particular called the Gentian Cafe, which was the only place in the village I had been able to find a chai latte! I’ve had some lovely meals at the local restautants and generally enjoyed the ambiance of the small village.

I’m spending my last day staying with my AirBnB host in Kinvara back in Galway city. I’ve just met with Dave, a member of the Galway Traveller Movement, an independent Traveller organisation established by Travellers and non Travellers in Galway. Dave has been able to give me a great insight into the Traveller community and the challenges they have faced over the past many years. The Galway Traveller Movement’s ultimate aim is to achieve equality and self determination for the Traveller community in Galway city and county. The Traveller community has recently been recognised as an ethnic group here in Ireland, with it’s own culture and language. However I have been very sad to learn that this group is still very widely discriminated against by the councils, law enforcement and the general community. Applying community work and human rights based approaches GTM plans to dedicate its resources to enabling the Traveller Community to be part of a movement that challenges structural inequality.

I have now completed most of my research and am up to date with my blog. Tomorrow I am sailing off to Inisheer, the smallest of the Aran Islands, for three days. I am hoping to  use this time to relax after a busy few weeks of research and traveling around, and actually start to do some writing!

One thought on “Day Three in Kinvara: Dunguaire Castle”