On Sunday morning I woke at my AirBnB accommodation in Dundrum, a suburban area seven kilometers outside of Dublin city. I was relieved when the hot water system worked, and revelled in the cleansing sensation.

I didn’t have much planned for my three-day stay in Dundrum but to relax prior to the journey home, but I did have one last small piece of research to complete. The reason I had chosen the area of Dundrum for my final stay of the trip was because it was the location of the Central Mental Hospital.

The hospital began in 1850 as Central Criminal Lunatic Asylum for Ireland and was the first secure hospital in Europe. This was an early move of an ideological initiative throughout Britain and its colonies which included the building of the infamous Broadmoor Hospital in England. The site was originally chosen to be soothing to mental health patients and was intentionally not linked to any particular prison service to maintain distinction between criminality and illness.

The facility is operational, so of course I was not going to be able to go inside the grounds, but I could definitely scope out the exterior and take photographs for my research. In fact, I had a view of one of the buildings through the window of my room at Catriona’s house. 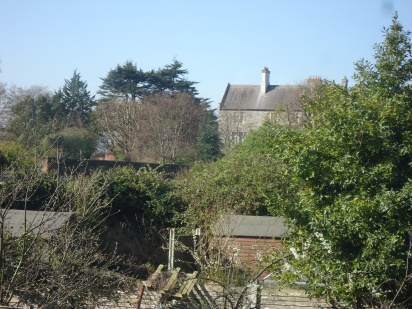 The hospital was a seven minute walk from Catriona’s house. The surrounding area was quiet and peaceful, a contrast to the nature of the facility so close by. Central Mental Hospital made it’s eerie presence known by the imposing 18 foot high wall that seemed to emerge from behind the leafy greenery of the trees and bushes. A huge locked gate hid the 35 acres the made up the grounds. 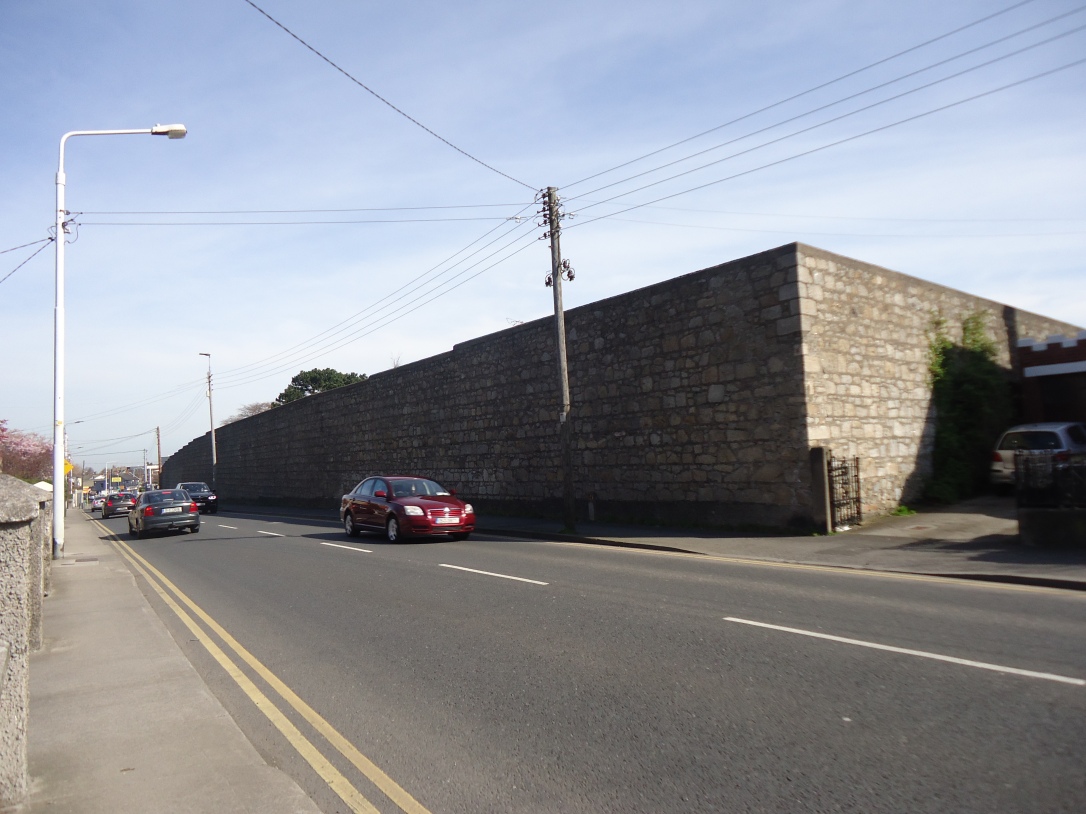 Holding 140 patients, two-thirds are there by order of the Minister for Justice, some on murder charges and others on lesser criminal charges. Patients were transferred from Mountjoy Jail to Dundrum when found guilty and certified as mentally disturbed, or when they were certified unfit to plead. The remaining one-third of patients are sent by order of the Minister for Health and are known as ‘207 patients’, usually ending up in Dundrum from another mental institution following assault charges.

The medical staff at Dundrum consists of three psychiatrists. The two doctors look after 36 murderers, 50 remand patients, and 54 ‘207’ patients. Of the total of 140 patients, 112 are men. 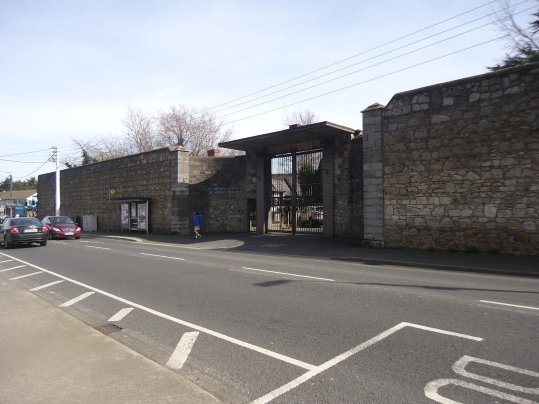 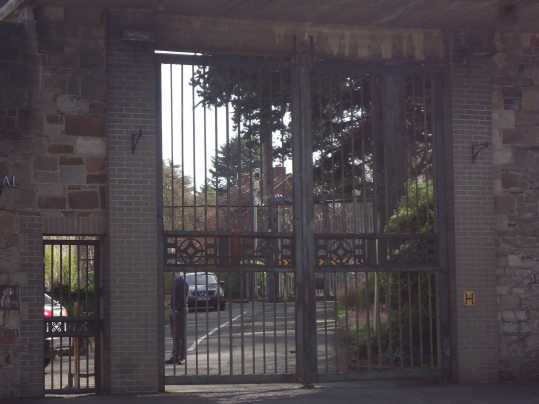 The remainder of my exploration of the area of Dundrum was much more light hearted. I continued along Dundrum Road, with the Dublin Mountains towering over the area in the near distance. I made it all the way down past the Dundrum Luas Bridge and spotted Saint Nahi’s Church on the other side, a quaint stone building with a lush green cemetery sprawling down the hill behind. I decided to take a walk through the grounds. 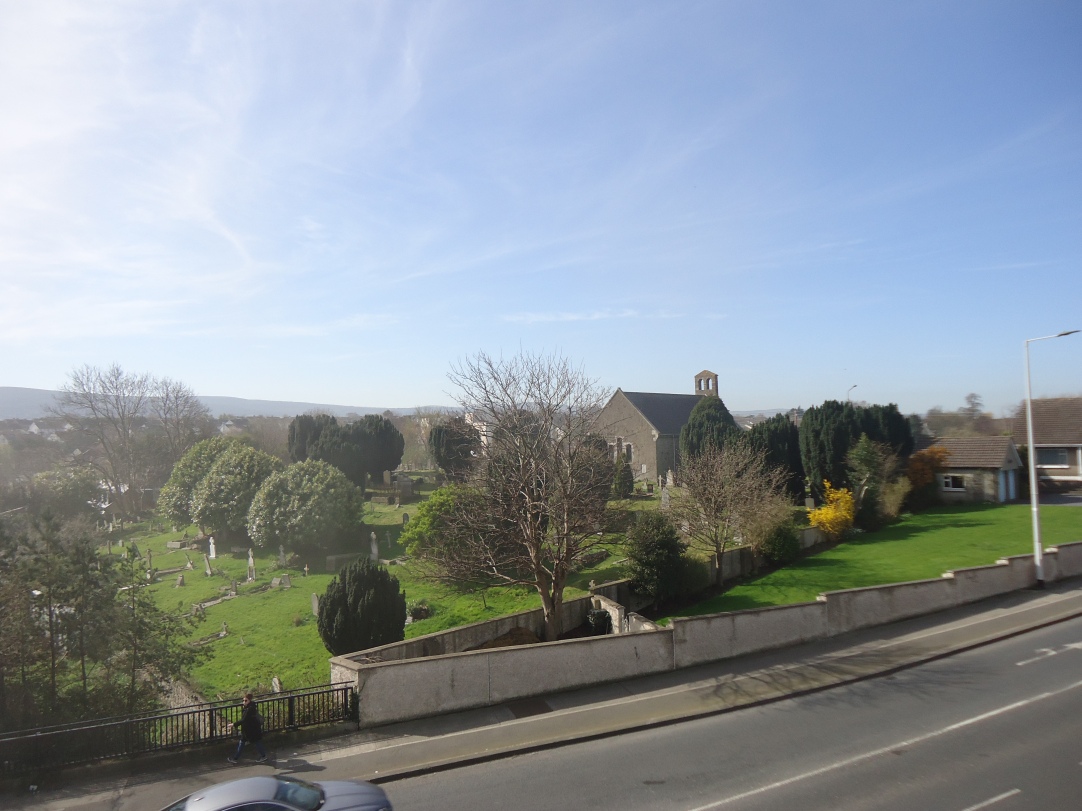 Built in the 18th Century, the current church is still in use by the local Church of Ireland community and is one of two churches in the Parish of Taney (historically encompassing the whole area around Dundrum). It is built on the site of an early Irish monastery founded by Saint Nahi. St. Nahi’s stands on the grounds of the original monastery, having been refurbished several times, most recently in 1910, after a period when it was in use as the local boys’ national school. 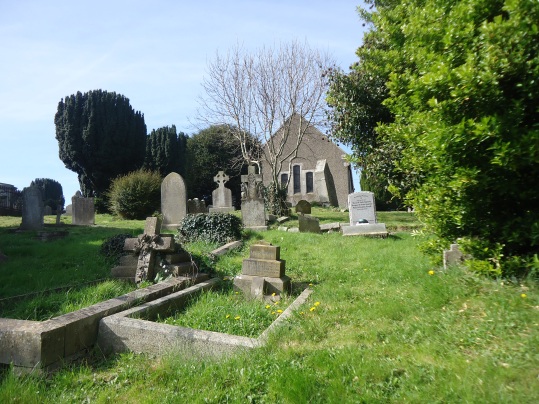 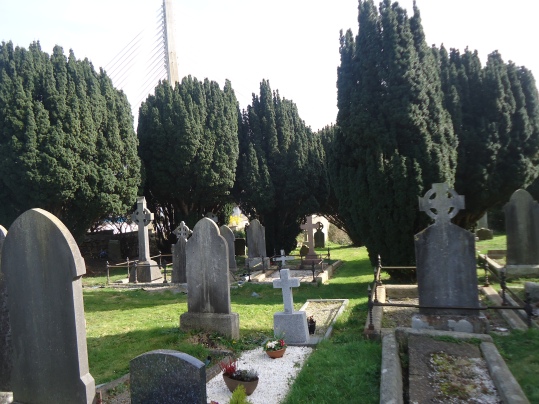 After my wander around the grounds of St. Nahi’s, I headed back to Catriona’s place. I used the next two days to rest and catch up on my blogging, and on Monday afternoon prepared to fly back to Brisbane early on Tuesday.

I wanted to take the opportunity to thank everyone who has been following my journey to Ireland through this blog for the past three and a half weeks. This trip has been more than a travel destination ticked off the list; it has been a writing goal achieved. In 2014 I decided to start work on my first crime novel, and it soon became apparent to me that I couldn’t just go off my memories from my first trip to the Emerald Isle in 2012. I would need to undertake another trip to create a realistic setting for this book. Three years later, I have completed that goal.

I undertook this trip with no financial assistance from any arts funding bodies or crowd funding platforms.  This trip was a challenge not only practically but also emotionally. Like I said in my very first blog post for this trip, when I finally made the decision to undertake this journey, I became engaged soon after, and had wedding plans to consider. After several discussions with close family and friends, I talked to Greg about taking this trip. It was a big ask, as we would be delaying our wedding, but I simply had to get this trip done before committing my time, energy and finances to our nuptials.

In the process of prioritising this trip, I feel I grew so much as a person. I stood up for what I believed in and what I really wanted, even when I knew it would challenge my relationship. And it certainly did, but what Greg and I have is so strong, and it survived my trip to Ireland, just as I knew it would. Now I am home and ready to start an exciting new book, and to plan a beautiful wedding to the man of my dreams. I hope one day to be able to take him to Ireland to show him what I have experienced there.

I also wanted to take this opportunity to encourage everybody who is reading this that your travel dreams are not out of your reach. I work part time on average thirty hours a week earning $19.10 an hour without penalty rates. What took me so long to get to the stage of believing in my ability to take this trip is that I thought because of my lack of formal education, and subsequent average income, that I did not deserve to undertake world travel. Not only did I think I didn’t deserve it, but I couldn’t see how I would be able to afford it even if I tried., Any money I saved was quickly sucked out by living expenses. What I had to do was save for my trip in increments, and I plan to write a blog post specifically on how I did this. First I lay-byed my flights, and broke it down my anticipated expenses into categories, e.g. accommodation, food, travel etc. Each fortnight when I was paid I put whatever money I could aside and ticked off each item as I went along. I worked as much as I possibly could, saying no to days off and early finishes when offered. I went without luxuries and leisure activities.

I do consider myself to be in a fortunate position; for example, I don’t have any health concerns that keep me from travelling. But it does still irk me when people say that travel if for a ‘lucky few’. If money is your only concern, travel is within your reach. If you really want it, you will make it work. You will make sacrifices, you will go without. You will find the motivation to get there. If you don’t earn a lot of money, save in increments and pay things off as you go along instead of trying to save up a bulk amount.

You are in control of your destiny; the position you are in is the result of your own decisions. I would have never imagined that the timid little girl I was at school, who was too shy to even talk to anyone or ask for help, would be brave enough to travel across the world alone, and to some of the most remote places in Ireland. I hope that by following this blog, I have inspired you to not only take on your writing or travel goals, but any goals that you desire. 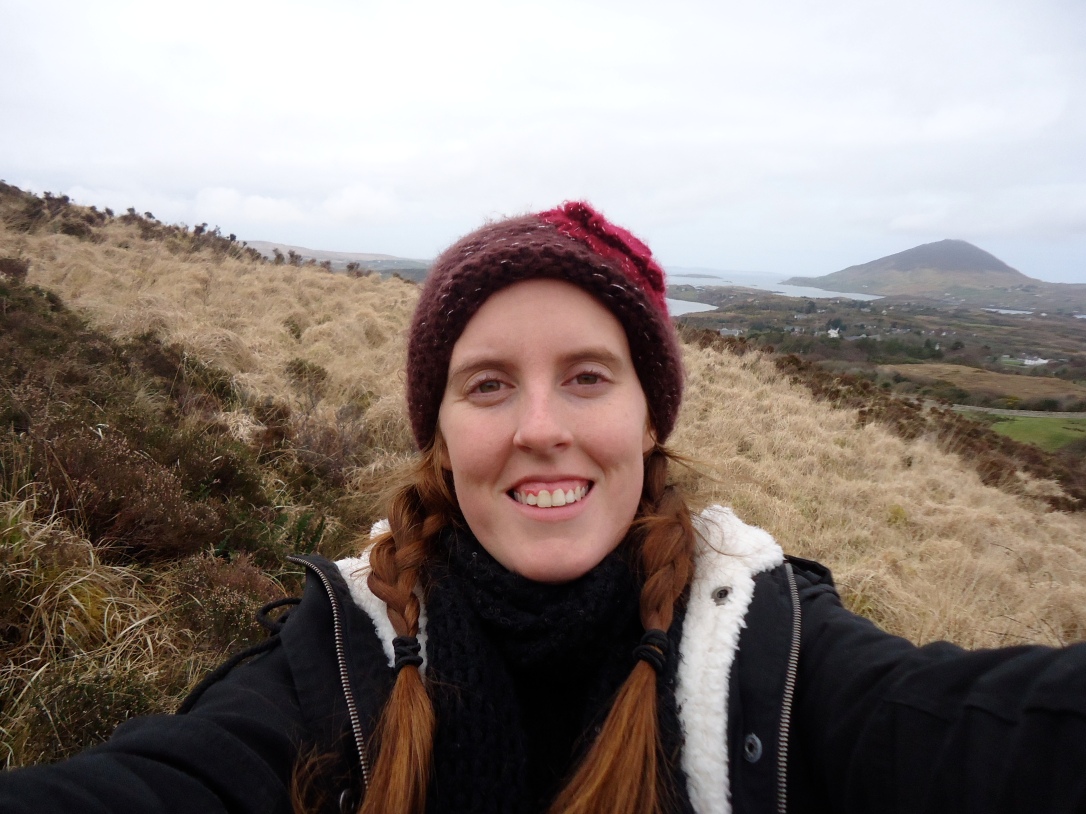