Welcome to Stop No.4 on my Books By The Beach tour!

Broadbeach was the first suburb that my partner and I called home when we moved to the Gold Coast in September 2017. We lived there for a year, just 300m from the beach. 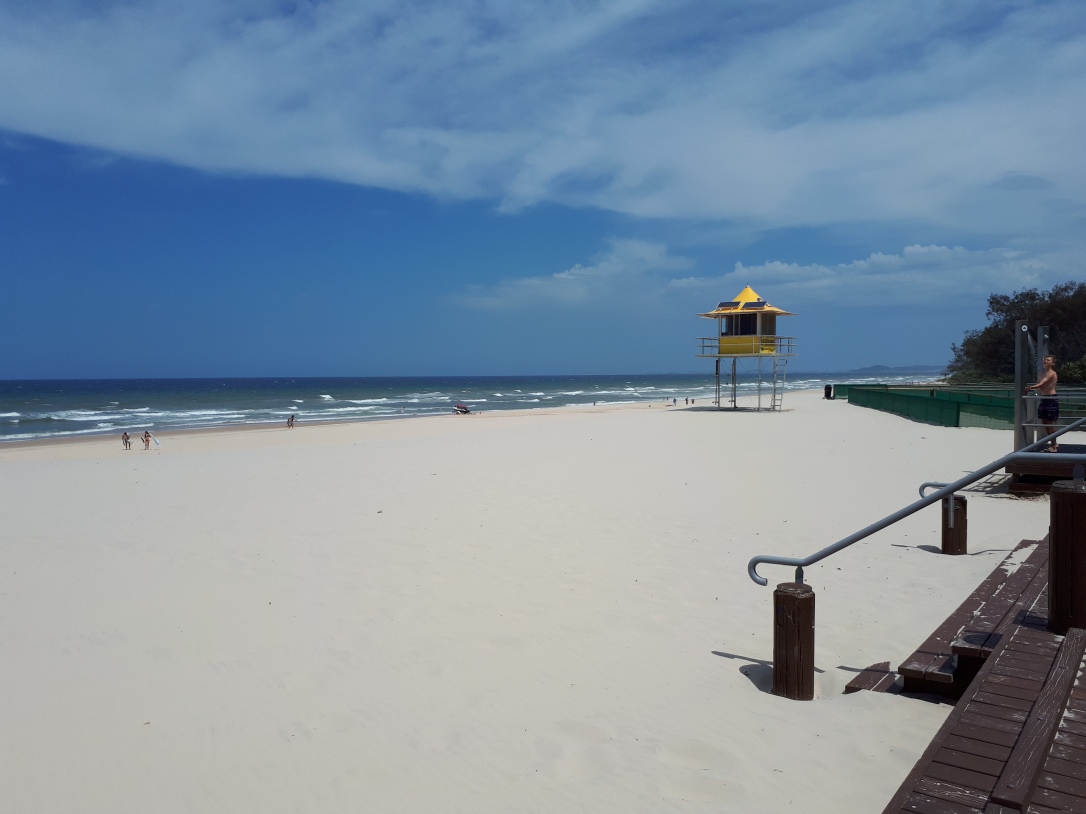 My apologies for any confusion-I filmed this video when I was still living in Broadbeach. I have since relocated further south to Coolangatta!

Once the little brother of neighbouring Surfers Paradise, Broadbeach or “Broadie” as the locals call it, has made a name for itself in more recent times as a premier dining destination, with an ever-expanding offering of restaurants and bars. Broadbeach Mall is often host to buskers, and even an annual blues festival. Broadbeach is home to The Star Gold Coast, formerly Conrad Jupiters casino, as well as Draculas’s Cabaret Restaurant, the Gold Coast Convention Centre and Pacific Fair Shopping Centre. Beachside parklands span the entire beach foreshore and are home to weekend markets and weekly outdoor exercise programs.

The area south of the original Harpers Wharf is now part of the Cascade Gardens Reserve. The estuary area around Little Tallebudgera Creek and the superb stretch of beach to the east was a feasting ground for the aboriginal people of the area, the Kombumerri people.

Apart from moveable feasts, evident from the surviving eugarie shell middens, archaeologists in the 1960s uncovered an ancient aboriginal burial ground at Broadbeach. In the 1980s, the ancestral remains from this burial ground were reinterred in a reserve known as Kombumerri Park. 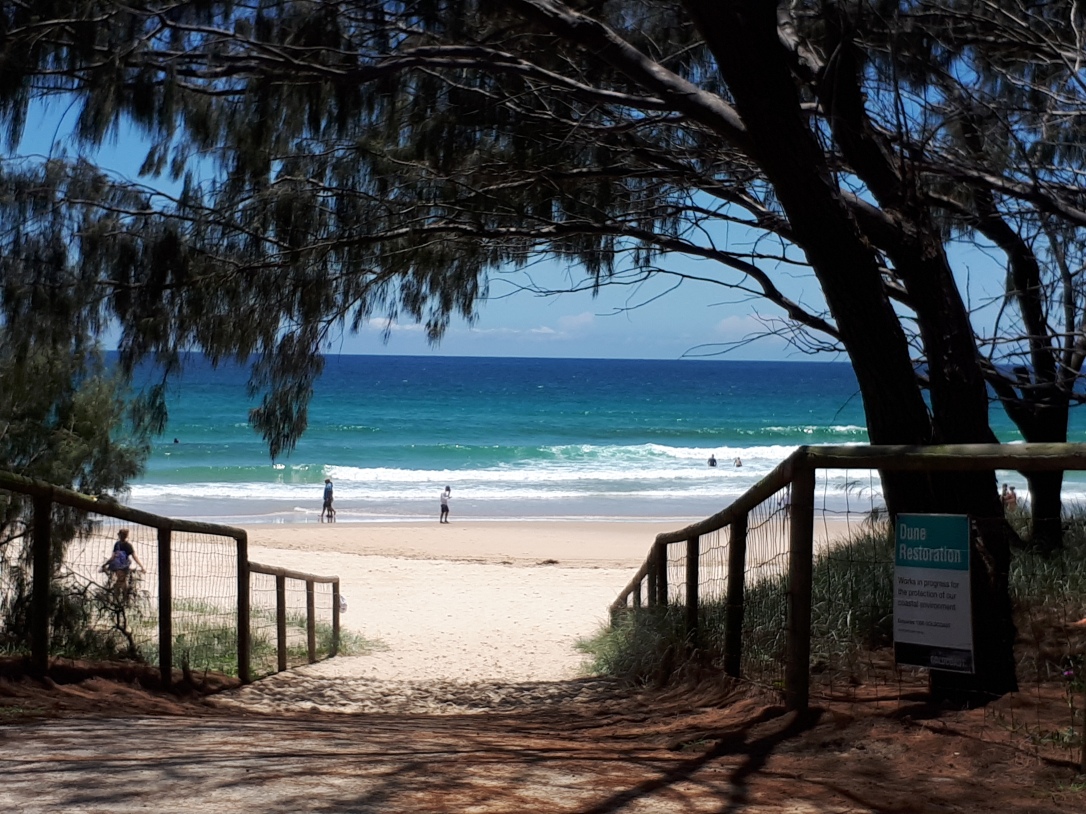 The Broadbeach sand dunes were a strategically important resource during World War 2. Southport Minerals mined the mineral sand rutile from the leased reserves and exported the concentrated mineral overseas for the production of special alloy steels and welding equipment. By the mid 1950s, mining had ceased, the dunes were reconstructed, planted with grasses and trees and the land auctioned for redevelopment. The commercial and housing development of the area was led by the construction of the Lennons Broadbeach Hotel completed in 1957.

Built on a site which had been mined for mineral sand, the hotel was often promoted as an oasis in the desert and is in fact now the site of the Oasis commercial centre in Victoria Avenue.

Told in the first person, Call Your Grandma recounts the storyteller’s experience witnessing a tragedy, and reflections on the events that led to that fateful moment in time. 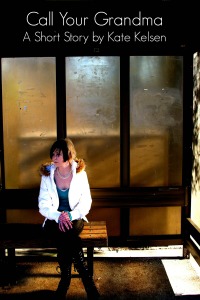 I hope you have enjoyed your time here with me at Broadbeach.

So today the pot of 🍯gold🍯 was out in the middle of the ocean😂🌈 two dolphin spottings today, one from Point Danger just and one from the top of Greenmount Hill! 💙🦈
🏅Little Wins🏅 Today was focused on finishing my last assessment for my current unit of study in my Cert 3 in Business. Organising Schedules- yay! 😞 For someone who loves lists and routines I still found this unit quite boring 😅 finished and sent the assessment away for marking, and so ready to unleash some creativity for Writing Fridays with @gclibraries tomorrow! . . . #littlewins #dailygoals #sunsetsoverthebeachesfromnowon #winterinqueensland😎 #study #business #boring #creativewriting
Oops forgot this one. I actually have started reading this a short while back but had too many books on the go at once so decided to finish them first 😂
Choose wisely what you feed your mind. What books are you reading right now? . . . #youarewhatyouread #youarewhatyouwatch #choosewisely #feedyourmind
I have been mostly quiet about the protests in the US, but these events have caused me to do a lot of soul searching about what I should be doing and not doing, saying and not saying. Waiting for guidance on the response that felt best for me. I am not one to just go and do/share/repost something because everyone else is doing it. I won't be pressured by social media movements because it seems the the socially acceptable thing to do. I have shared two posts that did resonate with me, and as a result I have felt completely emotionally drained. Resharing lots of posts and putting black tiles on my socials simply hasn't felt right for me, and while I know doing these things is not about me, I still need to be aware of how it impacts my mental health and energy levels, as we all do. After all, we can't give from an empty tank. My response to the current situation is to educate myself, and so I have revised my current reading material in respect of the current situation. I'm especially excited about reading 'The Awakened Woman'. I first heard the story of Tererai Trent on Oprah, and was delighted to find her book The Awakened Woman at a Kikki K store on the Sunshine Coast. For those of you that aren't familiar with Tererai Trent, as a young girl in Zimbabwe Tererai yearned to receive an education, instead by the age of eighteen she had already become a mother of four. Now, not only has Tererai earned her PhD but she has also built schools for girls in Zimbabwe. But let me get one thing straight. I am have decided to read these books at this particular time because of what is going on right now. As a personal mark of respect and solidarity. But I bought these books a year ago because these were inspiring women with inspiring stories to tell. Not because of their skin colour. In our efforts to conquer racism, I hope we don't create more separatism and duality because of skin colour. A revolution has many lanes. Be kind to yourself and to others who are traveling in the same direction. Just keep your foot on the gas. #amreading #mayaangelou #tereraitrent #weareone #theawakenedwoman #iknowwhythecagedbirdsings
Big Magic by Elizabeth Gilbert. I have read this book twice. The first time I read it with rose-coloured glasses expecting a book full of encouragement to follow your creative dreams no matter what. As a creative writer, I was somewhat disheartened by Liz’s honesty about the reality of living a creative life. I questioned my goals and how I viewed my own success as a writer. The picture of success as an author, and the goals I had set in alignment with that picture of success, were suddenly challenged, and I felt lost. The second time I read the book, I realised that Liz was not trying to discourage us from pursuing our goals, just not to be so attached to the outcome. To create, regardless of whether we achieve worldly ‘success’. And this notion has helped me connect with my love of storytelling in a whole new way. What book/s have changed your life? . . . #booksthatchangedmylife #inspirationalstories #amreading